Far from a romantic ideal of Bohemian creativity, the “starving artist” lifestyle was very real for young designer and printer Leonard Seastone.  Recalling his early career living and working in a small studio in upstate New York, Seastone remembers days when he and his friends had nothing to eat.  He speaks fondly of William Targ for many reasons.

“Bill would take me to lunch at the Algonquin in Manhattan.  He fed me and gave me work and helped me build my self-confidence.”

Seastone studied poetry at Fairleigh Dickinson University, where his professor Loyd Haberly inspired him to learn letterpress.  Seastone created his first book in 1972. After graduating from Fairleigh Dickinson, he earned a master’s degree in fine arts from Purchase College in New York.  On the Purchase faculty since 2000, he has also taught at Western Carolina University and the University of Northern Iowa.  He directs The Tideline Press in West Sayville, New York.

Targ met Seastone through Janie Tanenbaum, who introduced them in 1979.  Tanenbaum was a buyer for small presses at the Gotham Book Mart.  “Bill hung out at Gotham,” recalled Seastone, who held his first solo show there.  “He was a brilliant man.  I was in awe of him.”

Targ Editions authors were also eager to work with William Targ, says Seastone.  Classical designer Abe Lerner had no interest in printing contemporary poetry, but Bill Targ was “in a separate place.” An equally opinionated man, he loved life, people, and beautiful books, especially first editions.  “He lived in both an intellectual and tactile world,” remembers Seastone.

The small press world was “big” in the early 80s, Seastone says.  Insiders debated whether to name their craft “small press” or “private press,” neither of which suited.  Fine press eventually stuck.  Bill Targ weighed in on correct nomenclature in Abacus Now: Footnotes to Indecent Pleasures and Observations on Fine Book Printing, Book-Collecting and Matters Personal including How to Survive in the Computer Age, Targ Editions No. 24.

Seastone designed poet Wakoski’s Saturn’s Rings, he says, because he wrote poetry as well.  While working on it he recalls Targ saying, “I never tell my designers what to do, but wouldn’t it be nice in a square format?”  Archival records reveal Targ’s involvement down to the detail of a tiny flower in Wakoski’s denim jacket pocket for her cover photo.

Leonard Seastone has had one-person shows at galleries throughout New York and New Jersey, including Fairleigh Dickinson University Library, SUNY Purchase and Albany, the Gotham Book Mart in Manhattan, and Greene County Council on the Art Gallery, Catskill. He has participated in group exhibitions worldwide, from Yugoslavia and Latvia to Israel and England.  Juried exhibitions include the 1982 50 Best Books of the Year Book Show at the American Institute of Graphic Arts in New York.

The official Archive for Leonard Seastone and The Tideline Press is housed at The Art of the Book Collection, Sterling Library, Yale University.

Echoing William Targ’s thoughts in Abacus Now, Seastone says, “Books don’t reveal themselves to me on a computer screen.  A computer is a tool, a means to an end.” He carved Bill Targ’s name in stone, but was unable to give it to him before Targ died in 1999. 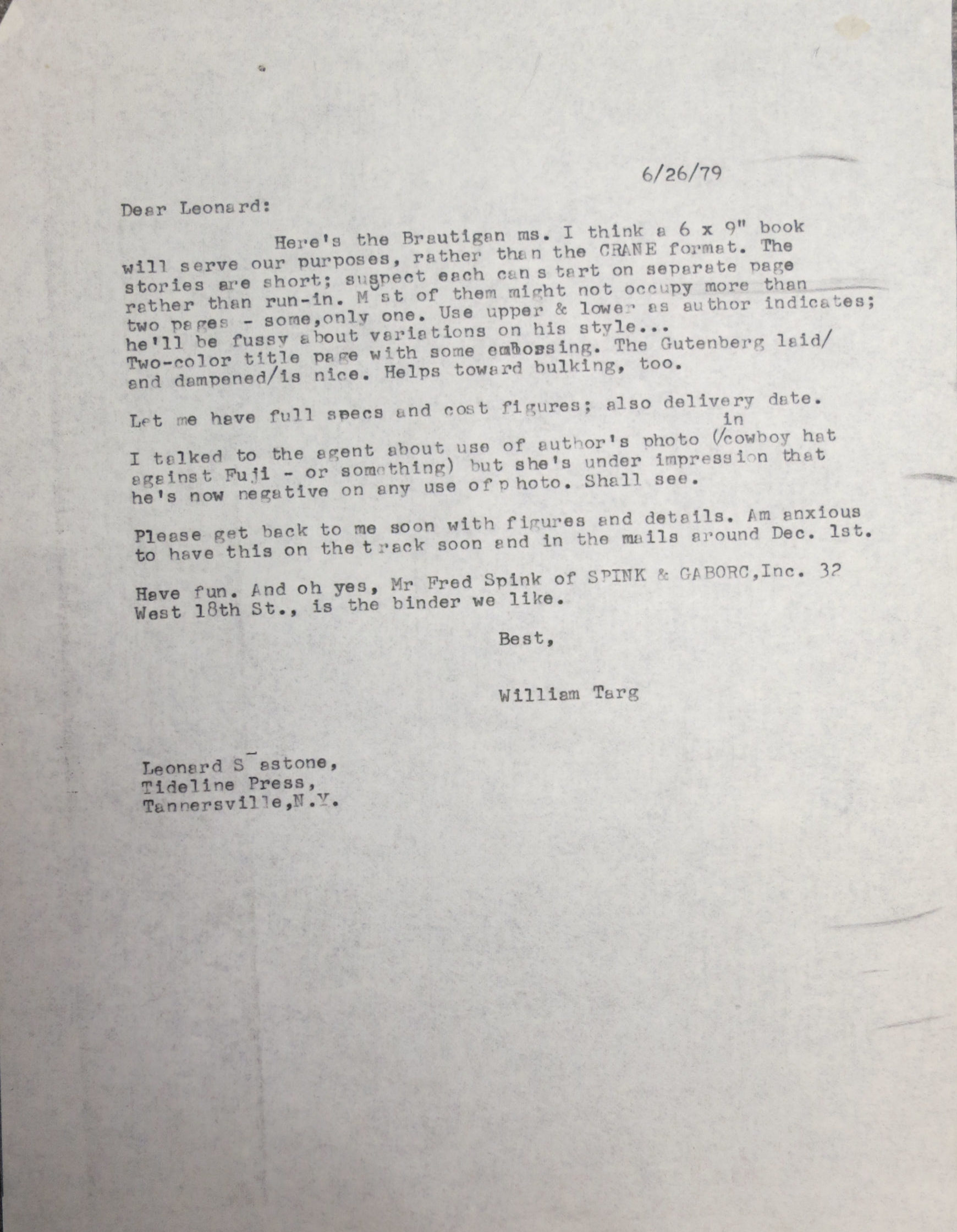